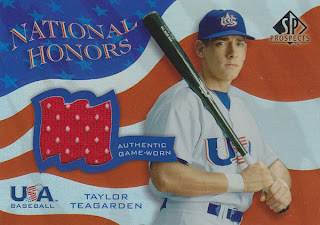 Jersey card from Taylor Teagarden of the Texas Rangers.  Just got this in a trade on Beckett.com.  Not sure how this guy is going to do this year but if he's doesn't make it this year he's probably done.
Posted by Ultimate Dog Stop at 2:04 PM No comments: 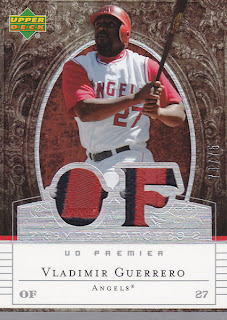 Bought this one off of http://www.ebay.com/.  Got it for a great price.  The seller had is ending at the wrong time.  I think it actually ended while the Superbowl was still on so no one even bidded on it.  It is numbered 74/75.  I'll probably trade it off to get more of a player I really collect.  I like the guy but I just don't collect him much.
Posted by Ultimate Dog Stop at 11:33 PM No comments: 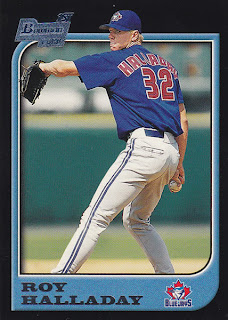 Roy Halladay.  He has to be one of the top two starting pitchers in baseball today.  I already had the Bowman Chrome version and saw this one in a thread on Beckett.com and had to have it.  This whole set is awesome and it has a lot popular rookie cards in it.
Posted by Ultimate Dog Stop at 8:36 PM No comments: 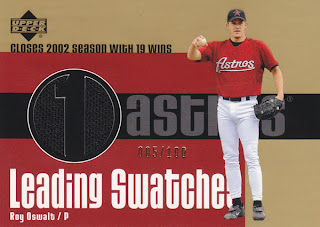 Traded a good card away to get this beauty.  This guy just doesn't get enough credit for his skills.  Baseball season is almost here.  Now if Roy can just get some run support he would be a 20 game winner every year.
Posted by Ultimate Dog Stop at 11:31 AM No comments: 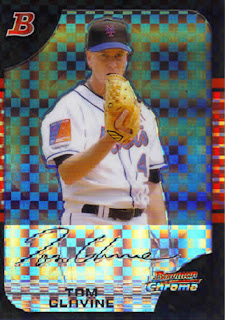 Tom Glavine has officially ended his playing career and reunited with the Braves' organization.  The Braves have announced that Glavine has accepted the invitation to serve as a special assistant to team president John Schuerholz.  Glavine is such a great guy.  This is a very smart move for both Tom and the Braves.  1st ballot Hall of Famer for sure.  I grew up idolizing this guy.  Find more info here:  http://atlanta.braves.mlb.com/news/article.jsp?ymd=20100211&content_id=8061414&vkey=news_atl&fext=.jsp&c_id=atl
Posted by Ultimate Dog Stop at 6:24 PM No comments: 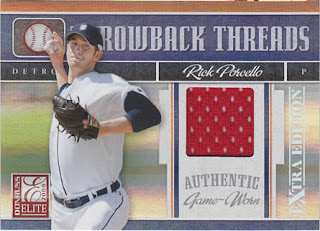 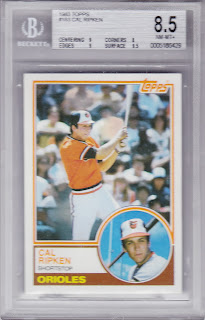 My first graded card that I have ever bought.  I think it's a great grade for a card from 1983.  It's Cal Ripken Jr.'s second year card.  Got it for a good price too.
Posted by Ultimate Dog Stop at 12:45 AM No comments:

Can Topps Save Baseball Cards?

Last week, Major League Baseball announced that it had struck a deal to make Topps the game's exclusive trading-card maker. This news was probably greeted with horror in Carlsbad, Calif., the home of Upper Deck. Topps' younger rival will maintain its licensing arrangement with the baseball players' union, meaning it will be free to print cards of Mark Buehrle wearing his deer-hunter's camouflage but not his White Sox uniform. For Upper Deck, the deal looks a lot like a death sentence, at least for its baseball division. But what does this new arrangement augur for MLB and Topps—will handing the entire field over to a single manufacturer turn around the ailing baseball card industry?

I wouldn't bet my mint condition Cal Ripken Jr. rookie card on it. The card business has been in a steep decline ever since the 1994 baseball strike. As children fled the hobby for Pokémon and video games, card makers have increasingly relied on adult collectors willing to shell out big bucks for flashy, premium cardboard. Baseball's solution to deal with this bloat has been to scale back on the number of producers. In 2005, MLB ended its arrangement with Donruss. (That same year, Philadelphia-based Fleer went under on its own.) The move to drop Upper Deck is just the league's latest attempt to make store shelves less cluttered and more inviting to kids.

I've spent much of the last two years writing a book about the history of baseball cards, and I now know more about the history of baseball-card monopolies than I'd like to admit. Topps has been here before. In the early 1950s, the scrappy Brooklyn firm waged a fierce battle with Bowman Gum for the hearts and minds of grade-schoolers. Über-nerds like me refer to this as the Card Wars era. Topps proved to be a wily and relentless competitor, going so far as to develop its own scouting system so that it could sign rising stars to exclusive deals. Jim Bouton, the former Yankees hurler and Ball Four author, told me that he and all his minor-league teammates had Topps contracts put under their noses as soon as they showed up to spring training. The players, Bouton said, "lined up like they were getting their flu shots." They all signed away their rights for the token $5, known then as "steak money."

Topps bowled over Bowman, buying out its opponent in 1956 for a relative pittance. The company racked up so many exclusive player contracts that other gum makers couldn't get into this newly lucrative business. Fleer was in a position similar to Upper Deck's unenviable one today—it had to work around Topps' airtight contracts, leading to some comically bad card sets. In 1959, the only player Fleer managed to sign was Ted Williams. The company rolled out an 80-card issue featuring nothing but Teddy Ballgame—"probably 79 more cards of Ted Williams than anyone wanted that year," as a former Fleer executive told me. (The dreary card titles included "Williams Slowed by Injury," "Ted Decides Retirement Is 'No Go,' " and "Ted Relaxes.") Fleer didn't fare much better with the baseball cards they packaged with low-sugar cookies to circumvent Topps' exclusive right to stuff packs with gum or candy. One Topps salesman gleefully joked that the cookies tasted like dog biscuits.

The idea of a baseball-card monopoly may sound ridiculous, but it was no laughing matter to the federal government. In the early 1960s, the Federal Trade Commission carried out a long and costly investigation to determine whether Topps was violating antitrust laws. Lawyers for Topps and the government held forth on the "bubbleability" of gum and the "flippability" of cards, among other issues. Ultimately, Topps was cleared of wrongdoing, and the company dominated the field until a less-favorable court ruling in 1980 finally opened the door for Fleer, Donruss, and eventually Upper Deck.
The long Topps monopoly was no boon to children. It was always during the competitive years that baseball cards thrived. In the golden age of the 1880s, aggressive tobacco companies put out so many high-quality sets that kids begged strangers on the street for the cards from their cigarette packs. During the Great Depression, children parted with their pennies only because the various gum sets were so colorful and attractive. The Topps-Bowman war produced the most recognizable card of the post-war era, the 1952 Topps Mickey Mantle. Those cutthroat years also led to innovations such as the regular inclusion of player statistics, which had been hard to find until then.

Once Topps had the field all to itself in the '60s and '70s, the company's designs seemed to lose their pop. Some sets looked downright sloppy, like the one from 1969, when Topps dealt with player trades by airbrushing logos and shooting some players without their hats on. There was just one set of cards each year. If the company served up a turd of a set, kids were stuck with it.

Fortunately for collectors, Topps can't afford to be complacent these days. What was a $1 billion industry in the early 1990s has shrunk to about a fifth of that size. Topps' helmsman, former Disney CEO Michael Eisner—whose investment firm bought the company in 2007 for $385 million—seems admirably committed to luring children back to cards. The league apparently believes Eisner has a better shot at accomplishing that goal if his company stands alone.
Posted by Ultimate Dog Stop at 11:16 AM No comments: 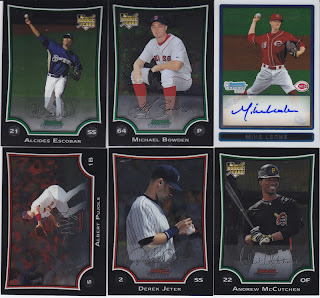 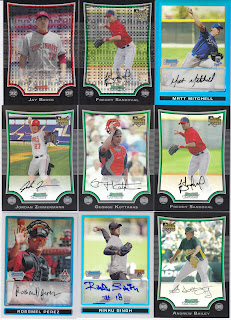 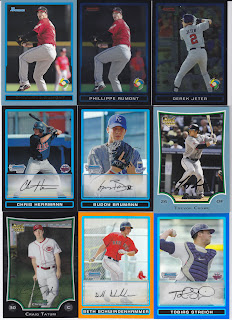 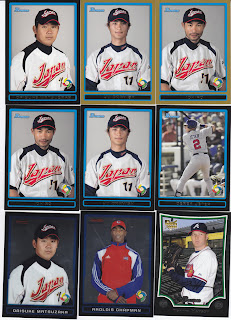 Got these boxes at the Tristar card show at the George R. Brown Convention Center.  Did ok.  Got at least double the value I spent on these.  I open a box of these every year and I always really enjoy it.
Posted by Ultimate Dog Stop at 7:49 PM 1 comment: